Training and behavior topics, guidelines, and tips for Chow Chows.

My husband and I will be picking up our 12-week old chowling this September!!

We previously adopted the best adult chow chow Hank. The rescue told us he was 4 to 6 years old, but when we took him to the vet we found out he was 8 to 10, riddled with arthritis and other health problems. We had him for four years, and he had an amazing life. We trained him to walk on a leash, wait to exit the house, etc., and he was very well behaved. For the first year, we had to hire dog walkers for his afternoon walks, and everyone fought over him! He was loving and we all adored him. Anyone who met him, he just filled them with love! It was wild because he did absolutely nothing... well, you know the rest!

However, he did have issues with growling. I would not say he was aggressive, but he knew what he wanted to do and what he didn't want to do, and he let us know. Because he was an older dog, we utilized the training method in which you ignore the dog when they do something they should not. It only happened a few times: the third day when my husband tried to get him off the bed, the first month when I gave him medication in a hot dog and he found it! (he was so betrayed), later in life while I was grooming him to tell me that things hurt (particularly, rolling him from one side to the other), and occasionally when he had a pig trachea treat, which he was no longer allowed to have.

Now, that we are raising our next chow from a puppyhood, I would love to teach Walter not to use growling as the only means of communication, preferably no growls. Another important thing for us is to make sure we can touch every part of him, make sure that he trusts us that we know best. Hank let us do 90% of things that needed to be done, but as he aged, he would not allow everything. My husband, his vet, and I thought this was more due to pain than stubbornness as it got worse as he aged. There was a lot of neglect. His whole mouth was rotted.

Now to the question, apologies for how long this is, do you know any chow-specific training books? A friend with a very well-behaved corgi recommended Respect Training for Puppies by Michael Welton. Have you heard of it or used it?

A breeder I spoke with told me to roll the puppy on his back and hold him down if he growls or bites or exhibits any aggressive behavior. Has anyone done this? The breeder has been working with chows for 30 years.

We have enlisted a trainer who has already worked with chows and enrolled him in puppy school, but I like to rely on multiple sources, so anything would help! My husband has raised other difficult dog breeds, like kuvasz, but I was only raised with one chubby cat, so Hank was my training experience.

P.S. Pictures of Walter coming when we pick him up!
P.P.S. I am attaching a picture of Hank when he was very content even while wearing his chow scowl!
P.P.P.S. I have been reading this website for years now, so I am asking this to see if anyone has any new information out there! Apologies if you've seen this question a while ago. 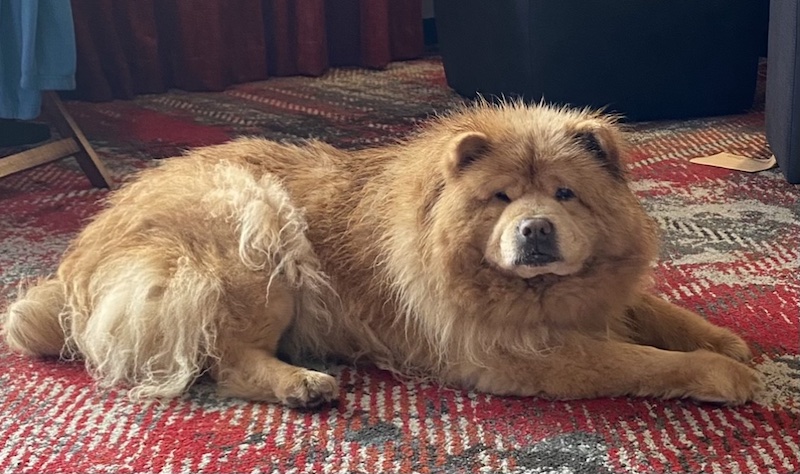