I am new to this site. I am not very computer literate and do not understand the basics of how the site operates. Anyone willing to educate me in simple terms ?
I have had 3 chows in my lifetime. I fell in love with the breed immediately. I currently have almost 16 year old Gandolph, who is a red/brown mix. he is the most precious puppydog. Gandolph likes me to lay on the floor with him and hold him in my arms when he sleeps. When he plays and gets silly he has "sneezing attacks". His brother merlin was jet black and totally mellow, whereas Gandolph has always been the alpha male. Fiona was a blonde chow girl who gave the boys something special to live for when she graced our lives. She had many names including "Fiona the Flirtatious" and "Bunny Foo Foo". We started calling her Bunny Foo Foo after she first met my 3 oz parrot, Jasper, who always had the run of the house. The first time she met Jasper he was standing on the carpet in the livingroom. she looked at him with an expression on her face like "Hey, what a funny looking little dude" and she bopped him on the head with her paw, like you would hit a bobble head toy. Afterwards, she bopped him or "Fooed" him every chance she could. Fiona was as light as the air and as fast as the wind. She loved to run away, just so we would chase her. We clocked her at almost 35 miles per hour and she was still increasing the distance between her and the car.

Gandolph was the self appointed yard-guard and chased many meter men out of our yard, over the fence, as fast as posssible. We had no gas hookup, were were solar powered, but about once a year a gasman would try to read our meter anyways. G

andy always put a fast end to that, but he never bit. Gandolph is the most good natured well behaved dog I have ever owned. The personalities of the chow breed are amazing! Gandolph just LOVES everyone and everything, except cats. He is too old to run now and a neighbors cat has taken into coming into the yard occasionally. Gandolph doesn't try to chase her, but have you ever seen a dog giving a dirty look? Hysterical!

Merlin was a little Buddah. He was so quiet and serene. If a stranger came on the front porch, Gandolph would be out there barking his head off at the person, while Merlin quietly and casually went behind them and secretly pee pee'd on their leg. He has been gone a long time now but we still miss him.

We saw a comedy routine once where the guy said his dogs were left up to their own independent discretion, those were our chows. They didn't always obey but they were all great dogs with amazing personalities. I would love to hear from any chow owners about their chows antics!
Jenjen
Top

Welcome to the site. Like most sites, we are set up by catagories, and sub-catagories. Then threads. You got to the General section fine, as that is where most folks post. Remember that if you get confused, just click Forum Home and start over.

It sounds like you have/had some wonderful Chows. I look forward to reading more about them.

I am new too. So it looks as if we will be struggling together.
Live well, Laugh often, Love much
Jazzminesong
Top

I SO enjoyed reading your first post!! Thank you for sharing and welcome aboard! I look forward future posts!
I have (2) chowdren and they are a mix but definitely have the chow personality....which I LOVE!!
They will be three years old in November. They are brothers from the same litter and they are cream colored. Joy, love, contentment, loyality, happiness....they have brought all that and more to my life

Welcome to the site - lovely to hear about your chow chows. They sound adorable, bless them.

Welcome! You will love it here. While I don't "know" anyone we all have these same, creative personality Chowdren and I can always just picture the antics described. How all our dogs are different and special and yet all the same. It cracks me up usually! Also all our love is mutual which is very wonderful.
Just explore the site. I learned so much here even though I believed I was very experienced.

Welcome! You have all the requirements needed: love of Chows. The rest is really trial and error on this board. I would just click around and read through some posts to get acquainted with the layout. It's pretty user friendly.
Top

Hello everyone.I am Richy and i am new member here.I am feeling great to become a part of this community.I love dogs so i joined this forum.I hope all people will join me.
Top 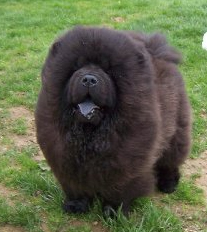 Hi .. I am new to ... I have ummmmmmmmm a few dogs lol ... mostly pomeranians which I show and after looking and hesitating for years I now also have my first Chow .. a truely magnificent creature .. my poms think he is just a bigger version of themselves ... think I worked out how to put the picture on .. will add picture of my other Chow Chow when I have a nice one

It's nice to see so many new folks, both experienced and new to owning Chows. As suggested by one of our members, click around and look at some older posts. If you want to know about a certain subject simply put the key words in search.

There are instructions about how to post a photo which I will be updating, but the secret for any photo posting is to reduce the width of your photo to about 300 pixels. If that is beyond your capabilities (as it is for many people) I suggest using photobucket to host your photos. They have a good resizing program.

"Hey . . . !!!
Guys I am new to the community.say me welcome I was browing this forum for more than a week and today finally decided to join it. Really nice forum, Keep up the good work.
And thanks for accepting me as a member of the community. Happy to be a member of such a great community.
\Have a nice day all."
burlingame gym
Top

Welcome to all the Newbies!!!! I joined shortly after losing our beautiful girl, Kimba and found such sollace and support that I've stayed on to enjoy all the wonderful stories. Some lovely, some sad, some challenging, and many, many joyful. You'll find lots and lots of support here and I look forward to sharing when our new girl arrives in August/September of this year. Welcome, enjoy, and get ready for laughter and tears!!

I am also new to the site. As someone who does not have children my dogs are my kids. I am definitely a chow lover. In 1993 we got our first chow, a cream colored male for protection. My husband worked at night and I wanted a dog that would sleep in the house and protect me. I got a 9 week old puppy, who my husband named Lionel. He was great. His instincts were so good, he slept in the doorway of the bedroom and every so often he would get up and check every room in the house. When I took him to my parents house my father said "that dog patrolled all night". When Lionel was about 1 1/2 years old my husband ran across a red female chow who needed a home, she was being neglected. So we got Ginger who was about 5 months old. When Ginger was 11 months old she gave birth to 6 puppies - 3 cream and 3 red, although they are brown when they are born. Of the litter we kept a cream colored female, Teddie. Ginger later had one more litter, 10 puppies that time. We did not keep any of them but for a while we had 13 chows in the back yard! For many years we had the 3 - dad, mom and puppy. Lionel had a very sweet nature, not aggressive at all but protective of us and our home. Ginger was somewhat skittish, I think as a result of her being neglected and possibly abused before she came to live with us but she was a great dog. Teddie has always been a happy dog, her personality is really a combination of Lionel and Ginger. In 2007 we lost Lionel at age 14. It was a very sad thing for us. At Thanksgiving 2010 we lost Ginger at age 15 and it was heartbreaking. We still have Teddie, who is 14 years old and doing well. Thankfully, she does not have arthritis as both Lionel and Ginger did. As a matter of fact my Vet recently told us that Teddie is the best looking 14 y/o chow he has ever seen. In May of 2010 we decided it was time to get another chow as the girls were getting old. We got Kodiak, who we call Kodi, at the age of 7 weeks. He is a cream colored male. He has a different type of personality that any of the other 3, he is somewhat aggressive and is VERY attached to my husband. He has a funny personality, we laugh at him alot. I'm so glad we got him. When Ginger passed away, Teddie grieved but Kodi's presence was very helpful to her. She is very attached to him now. My dream is to win the lottery, quit my job and have a chow rescue. I also have 2 Rat Terriers but I guess that would be for another website!
Top
Post Reply
13 posts • Page 1 of 1