Talk about anything with your fellow Chow Chow regulars.

The famous American writer Mark Twain once said "News of my death has been greatly exaggerated." Zoey my twelve year old blue Chow Chow went in Wednesday for an over due dental exam. I received a call during the procedure telling me a growth was found on the top side of her tongue towards the back. I was told it be removed for biopsy. When I picked her up the "C" word was mentioned several times. To me Cancer is a death sentence, but I was told to keep a positive attitude. The next day Zoey did not eat, not unusual for a twelve year old after the stress of surgery. As the day wore on she seemed to be fading, my thoughts went from positive to negative. I had lost two other Chow Chows this year to illness and one new adoptee taken from me on adoption day because she bit me due to her unknown to me at the time severe arthritis. I Posted Zoeys Memorial before I took her to Emergency. I told the people at the E.R. the situation and was surprised they wanted to keep her for observation over night. I was told they would call me either way. No call until late Friday afternoon, they said she was responding well, but recommended another night for rest and observation. Early Saturday evening I was called and told I could come to pick her up?!?! I told my neighbor a devote Catholic that she was coming home, he said "On the third day she rose."
Zoey is not out of the woods yet, the biopsy report will continue the emotional roller coaster ride.
If I had any credibility here it must be gone now.
Remember this is a No Troll free Forum all my fellow Bloggers.
Top

Ok this is a little on the strange side. No wait a minute... this is strange. Why in the world would you not let everyone know the update on Zoey sooner? I understand life can be hectic but you managed to post other posts this weekend. You could have just told everyone you took Zoey in on Friday and your waiting to hear her prognosis. But to not update and let everyone think Zoey had passed on is just plain cruel. Anyway i'm super glad Zoey pulled through and my prayers are with her.
Last edited by chow4life on Sun Nov 10, 2013 3:17 pm, edited 1 time in total.
Top

Wokman:
Please have the courtesy to inform others in the Memorial and Prayers section that Zoey is still alive. Deceiving others on this site (otherwise known as a troll) and posting in Community Discussions a post entitled "Mark Twain," most would not bother to open a post where the title is not connected with Chows.

Chow lovers on this site care very deeply and have much empathy for others who have lost their chows and especially if their chows are battling some illness. We are interested in giving as much information and the experience we have to help chows. We do not need go through the heartache and memory of chows who have not truly lost their lives as of yet.

Chows that are ill, we include them in our positive thoughts daily. When a chow is declared dead, they are in our thoughts only temporarily. Much research has been done on the power of positive thoughts, prayers, etc. directed towards people who are ill and the same I am sure would apply to pets.

You are correct, you have lost your credibility and it has crossed my mind that you may not even have any chows at all and we are all being duped. If there even is a "Zoey" I am glad she is recovering.
Jennifer & Sheena
Top

Good grief! Who posts that their dog is dead before they are in fact dead? Then doesn't bother to correct their own information. I still haven't recovered from what you say happened with the girl you were supposedly rescuing although I kept myself from posting my true harsh thoughts on that entire subject. This is just too much!

I made my Post to the Memorial Forum before reading your responses here, so I'am trying to be sincere and apologetic as I can be. I must admit my posting was not in the proper order. I really had thought I was facing another loss and was going through some serious feelings that I had neglected Zoey's care and put her unfairly through this suffering. I did not have much hope for Zoey while she was at the Clinic but felt comfort knowing she was in a place that could monitor and take care of her needs. When the call came Saturday evening it was as much a shock as when I learned of the growth. I know the results of the report may be not what I want to hear and I will have to deal with it as I did with the other losses.
Top

Yeah, something is just not right here.
Top

Yes it is strange, the way this played out and I now know that I was not as good at handling the thought of loosing another one in less than three months time and just wanted it to end. After Abby became ill so suddenly last September; then having a new adoption being taken from me to be destroyed because she bit me due to her arthritis pain. I did thank the Shelter for not telling me about Halley's arthritis with words that cannot be printed here and reminded them that they said she had two strikes against her because she was old and a Chow. So all I can say again is sorry for the confusion. I'am sure if Zoey knew she would bite me and give me the cold shoulder for the rest of her life. 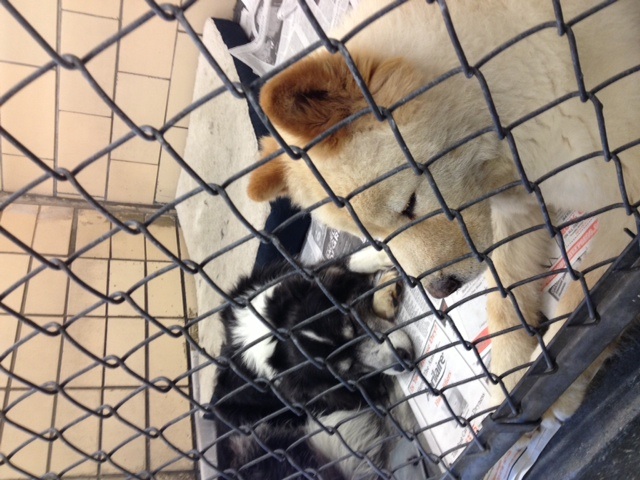