Talk about anything with your fellow Chow Chow regulars.

Hi Community, just a little by way of introduction:

I have two rescues: Max (aka The Bear) who is chow mix (about 30% according to the DNA test, but also a hefty dose of German Shorthaired pointer as evidenced by the colouring) and Bindi who looks pretty much purebreed.

We got Max in December last year and we guess he is about five years old. Bindi we got nearly a month ago, and she is estimated to be about 18 months. Both dogs were kept chained up, Bindi on a stranglehold, and we think she was bred a few times - she still has teats from her last litter

Remarkably, despite such mistreatment, they are both lovely, affectionate and seemingly well-adjusted dogs. Max is the calm elder statesman who sometimes get a bit grumpy with the young 'un tearing around, and Bindy is the prettiest little tearaway. 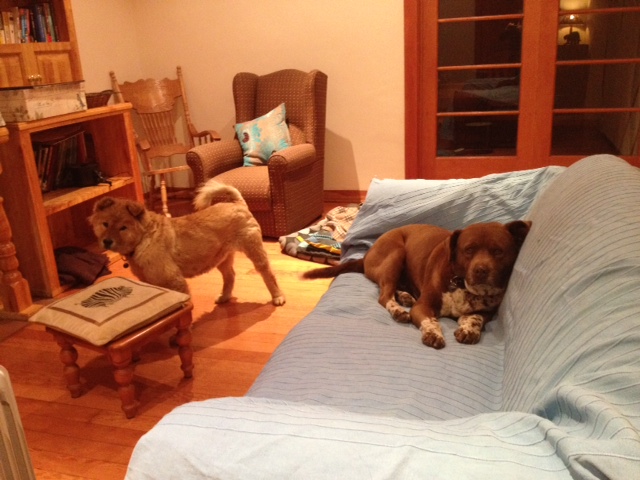 Cute furbabies! Welcome to the forum.

Hello and welcome. Such a pretty pair. How lovely to hear of two dog with such a sad background being rescued to a wonderful forever home. Bindi is sporting exactly the same post breeding coat as my Izzie. You may get quite a surprise when her coat comes back in. Izzie has a huge coat normally but they loose it after feeding puppies and she looks just like Bindi at the moment

Thanks for the welcome, everybody

Sirchow, her coat has grown a lot even since taking that photo (a week ago). Every day my husband and I remark to each other that she's growing!
Top

Welcome, I'm always glad to hear the rescue stories and your pups are lovely.
Top
Post Reply
6 posts • Page 1 of 1