Share and keep track of special events, birthdays and anniversaries for your Chow Chow.

Bruin now 3yo and being here with us for the past two years and seeing how wonderful and loving he is, I'm glad he found his way to us.
Chewie is 4yo and has become the Alpha and keeps Bruin in line. Since getting Bruin she's had to bulk up in muscle and weight (ever so slightly) to keep up with his rough play and wrestling. She also tend to Chow Fun and makes sure that she's still alive.

Chow Fun the senior of the bunch, 16yrs and change. She's doing well, still alive and kicking. Maybe not kicking, but definitely walking around.
Since she the elder and is slowing down, she decided to pass the role of Alpha to Chewie. And since then she spend her days basking in the sun and watching Bruin and Chewie frolic, eating Salmon and Sweet Potato treats or napping.

Great to hear from you, Stacy. Happier to hear how your trio are doing. Hopefully Tiggy will be able to see his best friend, Bruin, in the summer!

As requested (see attached), he's now 65# and Chewie is approx. 50#
Greeting me when I get home after work 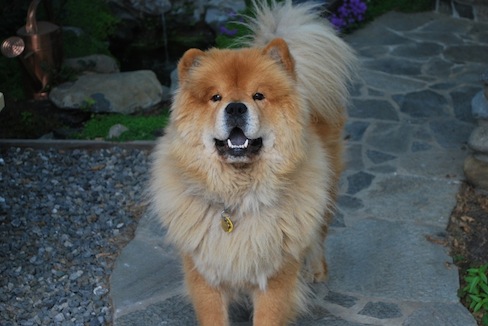 Playtime, he looks fierce but its only for show. 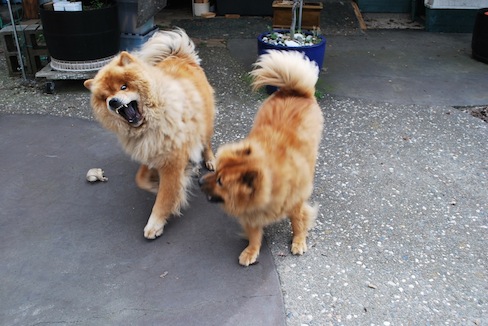 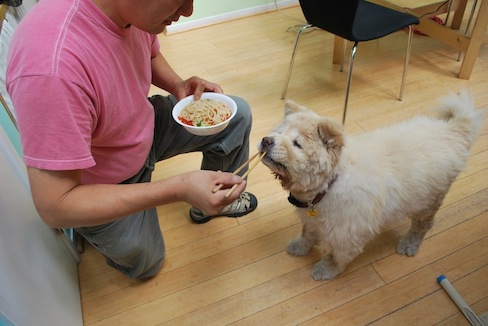 So good to see current photos. Thanks for sharing.

Hi there....I am glad to finally find a site for conversations about chow chows. I am a service member currently living and working in Belgium. I have an almost 2 yr old male black chow named JP (Jaguar Paw) and I have been contemplating if I should get another chow chow or play mate for him. I pay to take him to a doggie-day care which is not necessarily cheap, but I do this so that he has time to socialize with other K-9 species since it is just me and him. He is such a good little guy and very playful, his best friend at the day care is named Arthur who is a Leonbeger, but at present, Arthur is not feeling well and JP knows when he is not feeling well so he will sit by his buddy and keep him company and at times when Arthur is feeling up to it, he and JP will play a little until Arthur can take no more then JP will sit with him and even keep the other dogs away from Arthur if Arthur shows that he does not want to be bothered. I am also having a difficult time finding good groomer who does not want to shave my little guy. JP does not have any matting because I brush him daily, but I would like for him to look a little more smooth. I cut his hind area so the poo doesn't stick, but I would like to find some place that can provide regular maintenance.

I am sorry, I am all over the place with this post, I intended to ask if it would be good to get another chow chow as a playmate and how you have found having multiples to be working out.

I think it depend on several factors.
- do you have the space to have more than one dog outside?
- is it secure?
- how social is your dog with other dogs? Dominant, Friendly, Submissive or a mix of?
- I'd recommend getting one that is similar in age, size, weight and temperament.
Getting a puppy can be a challenge on multiple aspects and can be expensive too.
We got a new puppy (named Po, was suppose to be 100% Chow, but not. Looks more like Chow/Newf)
who's now 8 1/2 mo's & 55#, after Chow Fun died (16.5 yo).
He's been more work than Bruin & Chewie combined, couldn't leave him with the other two til he was 5mo.
because he was just too wild and would get in mischief or trouble with Bruin or Chewie.
But things are starting to calm down between the three of them. Chewie, our alpha, loves Po now that he's
learned the house rules, and Bruin also loves him too, plays big brother and protect Po when at dogpark when
other dog begin to play too rough with Po.


Personally I like having multiple dogs. I think help them with separation anxiety for owner, give them someone
to play and pal around with and becomes an improved home security system.
Top
Post Reply
7 posts • Page 1 of 1