Sandy,
A beautiful tribute to the rescues and rescuers. It's very touching and difficult to watch without getting a huge lump in my throat...
Karen, Kohana, Takoda, and our Chow Angels Nahkohe and Shiloh
Top

What a beautiful tribute to rescuers, rescuees, those who have died and Dandelion. I now have makeup streaks from the tears. Wish I was home to give a hug to Sophie and Ty, but it will have to wait until after work tonight.

I worked on this for a month and I can't guarantee that all these rescues are available, but I know this little sweetheart, Mandy from Birmingham, is still in bad need of a good home. So is Lakota, our foster in Nashville, among many others.

Thanks, babs, Dandelion was my impetus, hers was a face that just made me want to reach thru the computer screen and pull her out.

Then I hugged Mia and smooshed her little head.

I forgot for a moment that she had just had surgery.

Now, see what you caused.

Jeez...it makes me want to run out and start a chow rescue. Someone here was going to start one in Georgia and I told them I would help, and then i never heard anything.
Mia

OK, I know I promised a couple of days ago that I'd watch the video, but it took me awhile to work up the courage and, WOW, am I glad I did...

Of course, I cried and felt awful, but it certainly makes one appreciate what we've got and I gave both Ming (a rescue as a 5 week old puppy!) and Tempest big hugs and told them I loved them. Our housekeeper comes on Fridays and, since she has three chow kids, I'm going to have her watch it, too. Wait, then I might not get any work out of her...

Thanks so much for putting this together, it should be mandatory watching for everyone everywhere!!!!!
Top

Why you crying your big babies? Jeez.

I did not cry... My eyes were welling up and that was so sad and touching. I am saddened by all those babies who just want someone to love them. You did an amazing job.

Sandy this is so moving! Yup, I cried. Its so beautifully put together.
First thing I come on the site after a few weeks and this is the first post I open. I wish I could come on more often again.
I miss everyone and want to give all the chowkids here big hugs and kisses. And hugs to the humans too.
This and others like it (Jeff's) should be played at least 3 times an hour during every television show in America.
~ Sally

I've been thinking that too. Sandy should submit it as a public service announcement to TV stations. It may need to get edited to 30 or 60 second clips. Advertisers don't pay for public service announcements (PSAs), but they don't have any choice when or how often they run. Or we need to get someone on a talk show, especially a national one, with the whole subject of rescue. Don't know that an entire show about chows would go, but rescue in general might. It would be especially wonderful to run an ad in a national dog show like Westminster, though that may be a little like preaching to the choir, or maybe guilting the viewers into considering a rescue as well. Like the superbowl, I watch dog shows for the ads (well and learning more about specific breeds, so I can detect breeds in mixed breed dogs.) I think watching the spot could generate enough attention to get the cause publicized.

Hey it's me, Dandelion's mom. I just wanted to say that I watched your video over and over and over and it's beautiful and inspiring. I'm sending it to all I know. It's amazing that I stumbled on it almost 2 years after her adoption. We adopted her after we unexpectedly lost our rescued chow-collie mix to cancer. I was devastated after losing 2 dogs in 9 months. After much consideration, I realized I had room to help another one and Dandelion was the best Mother's Day gift I could have received! Anyway, the video is wonderful!
Top

wow, i just saw this. omg i really cant stop crying. so sad.
it really is ALL ABOUT THE CHOW. cant we all get along to try and help all of them get forever homes????
couldnt think of a better time to have this bumped up.
anyone can own a dog, it takes someone special to own a chow.

Nancy, I am so sorry for your loss, but so happy that you gave Dandy a second chance and a happy home.

You know, rumour has it that your son is quite the hotshot filmmaker. If his fees aren't too high, maybe he could be commissioned to create Dandelion's video response.

So beautiful! Makes me happy that I did get my baby CC (chow mix) from the shelter. She was only 5 weeks and very adoptable but the shelter was telling people that the puppies were Chow and I saw 2 people walk away. Thank goodness I did not have any preconceived prejudice about Chows. CC has given me so much joy and unconditional love in the 5 months I have had her. Sure it has been trying at times and there are times that it would be so much easier NOT to have her but I don't regret the work it has been. I love it when she looks at me when I am talking to her and tips her head as if to say she understands. I watched a show and was crying the other day and she came up, jumped in my lap--all 23 lbs--and kissed my hand as if to say, it's OK, I am here. I cannot imagine not having her now and she has a forever home with me. I have had dogs in the past that were more lawn ornaments than pets but since having to keep her in the apartment at all times I have truly discovered the joy of having a true companion. I will NEVER have an outside pet again. Thanks for the video. I agree that this should be on TV so people will understand that it is a good thing to rescue. Submit it to Animal Planet! Maybe they will air it.

PS: you made me cry and I got a call *working) right after and had to hide the fact that my nose was all stopped up so THANKS! Should have posted a warningabout this one. LOL
Top

Sandy, my son does enjoy making his movies, that's for sure. He'll definitely do a follow up video and since he does enjoy the amenities here at the homestead, I think he'll consider the "fee" paid in full! Great idea about making your video a PSA! Actually the ASPCA has used Dandy in an Animaland promotion about abuse. I found that by accident too. I assume that they use the newsletter for educational purposes in schools. Here's the link http://www.aspca.org/site/DocServer/Ani ... ocID=13341
I'm a stay at home mom so I'm trying to come up with something locally to promote adopting from the pound/rescue groups. I just haven't figured it all out yet.
Top

I tried to watch this a couple of days ago bbut couldnt, so watch it all the way through this morning and still cant stop the tears from flowing. Its so touching. As someone else suggest it would be good to shown on TV.
I need to hurry up and win lotto, so then I can build a big chow rescue home and then give them a forever home. I would rescue all the chows that I could.
Kathy
In Loving memory of Catbalou, Teisha, Tiara & Quoncha. .
Top

As I watched this, all I could do was think of Berkley and all the others rescued on this site lately, and how hard we crazy rescuers work to save one at a time.
Berks may only have been with me with a couple of months, but I wouldn't trade those days for anything.
Beautiful work, Sandy. Exceptionally painful to watch though, at least for me right now. 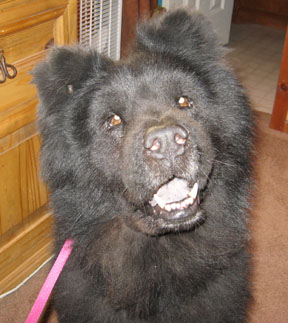 Laura Mac, mama to Fozzie-Bear and to Berkley-Bear and Oliver Wallace, my angel Chows
Top

I've never seen anything so sad and inspiring at the same time. thank you so much, I never appreciated our little girl more...

Every time I see them lovely photos of Berkley Bear it brings tears to my eyes also, he was just so cute.
Kathy
In Loving memory of Catbalou, Teisha, Tiara & Quoncha. .
Top
Post Reply
43 posts