Hi,
I would like to know your experiences with your chow living with other dogs. In fact, I wish to share my life with a chow when my akita inu will leave me one day, but I have some requiries on the relations of a chow and the other dogs of the family. Is it possible to have a male chow with a male german sheperd? I know that regarding some dogs, it is not possible to have in the same house two male or two female together (akita for example, if you have two males akita together they fight) and I have always heard that chow chow have a strong personality. So if some of you live with several dogs and a chow (or many chow) could you please tell me your experience? I precise that the chow puppy will arrive in my house after the german shepard (one or two years later). I think it would be better if they will not be dominant but cool. I had an experience with my white shepard. A friend of mine, had the brother of my white shepard. They did not live together but we had weekend and holidays together. All was perfect but at the age of 5 the brothers wanted to fignt each other. We had to make them walk for a long time with a muzzle for each andafter a walk they were more quiet and accepted to be together. But we had to be careful when they were together even if they were brothers!
Sso I wonder if a male chow chow will have a good life without fighting with anoter male? Thanks for your answers and sorry for my english (I am from France)
Top

I can only speak to my experience. We have two male chows, both are rescues. We had Loki over a year before Frisco came into our lives. I never thought they would get along. I was very surprised at their first meeting that Loki was indifferent to Frisco. In the beginning I only agreed to take Frisco until a proper home could be found for him. He and Loki were so good together and we got so attached the rest is history. He has been with us eight years now and we have never had an incident between them. Our daughter has a put bull and brings him from time to time and Loki is totally disinterested in him whereas Frisco wants to play him. Keep in mind every dog's personality is different. It is clear in our house that Loki is an alpha whereas Frisco is content to be a follower. Good luck with your decision.
Top

I think Ski is on the right path with that explanation. You may be lucky enough to find 2 chows that bond and never have an issue. I had that with 2 males years ago. They were about 5 years apart and never once had an issue. They happily co-existed and were best friends. But I do think that is a rarity with Chows of the same *Censored Word*. My current dogs are both Chows, male and female about a year apart in age. They get along well, never fight, but do play on the rough side and challenge each other to some degree most of the time. It can be frustrating if you just want to relax and sit about. Visiting dogs can be a bit different. Chows are going to be territorial and defend their space. If another dog is not viewed as part of the 'pack', they could have issues.

If you are going to have more than one dog in the household, particularly with one or more chow, then you need to understand how 'pack' mentality works. You need to do a bit of introspection and decide whether or not you have the personality to be an effective leader. If you aren't able to establish an environment where the dogs recognize you as the head, and respect that, then you will have trouble. You need to be able to control the resources and balance each dogs routine. Favoritism is a big no-no. If one dog or the other senses that a leadership position is available, then they will fight for control. Best to establish yourself, and not have a pecking order behind you. For lack of better explanation, there is you, and there is them. No favorites or '2nd in command'. Dogs may decide that something like that exists on their own (my female actually is submissive to some degree after she gets done with her play routine), but don't create that scenario on your own.
Top

I agree with both. I have a male and female that adore each other. My male can get goofy with other dogs,
But it depends on their personality. Honestly, I can take them both to the dog park with very minimal problems. I also have a group of friends that have many different dogs all around the same age and mine consider them part of their pack. It depends on your dog and your leadership. I know Ty and what dog he's going to challenge before they walk through the gate. I will stop it before it starts and he goes on his way ignoring the other dog.

Thanks all for your answers. It confirms what I thought and exept with some breed of dogs it's difficult to have in the same house 2 males. In my aim the chow will not leave all day long with the German shepard but only for weekend and holidays. I think that we will be able to assume the human leadership but we will have to take care that the 2 dogs will never be in conflict and then we will never let them alone together. Anf if one day we see that something is wrong we will make the necessary not to let them fight. We also see what kind of personality the two dogs will have. I will take my time to think about it and make my choice. The chow will come when my akita will not be there so I hope in 5 years at least. The german shepard will be born in january 2015 so we will see what kind of personality he will got and if he will be too strong maybe I will choose a female chow in this case.
Top

We have 2 chows a female and a Male also 2 male Airedales and a Male Collie oh and 6 cats and everyone gets along well they play good together also...maybe we got lucky or we wouldn't tolerate them not getting along...lol
Our dogs...Kodi Male chow..[Mia Female Chow RB

Let's see, ShenLung has looked after several neighbours dogs for various times, raised a rescue Shi-Tzu until we found a loving home, lived with Eeyore a Lion head bunny and protected him constantly from FengHuang's desire to have him as hossenfeffer and of course instantly accepted and raised FuShiLu after FengHuang's passing. We find Chow's at least ours to just be dominant, which is to say very relaxed when you know your top of the foodchain and everyone is there to be your friend.

Let's see, ShenLung has looked after several neighbours dogs for various times, raised a rescue Shi-Tzu until we found a loving home, lived with Eeyore a Lion head bunny and protected him constantly from FengHuang's desire to have him as hossenfeffer and of course instantly accepted and raised FuShiLu after FengHuang's passing. We find Chow's at least ours to just be dominant, which is to say very relaxed when you know your top of the foodchain and everyone is there to be your friend.

Hi there! Your English is very good.

My chow chow just turned 2. When we got him at 8 weeks we already had an 11 yr old toy breed and a 4 year old rescued husky mix. Wookie was heavily socialized and spent a lot of time with my mother's dog and the dogs of my friends. He gets along very well with dogs of both *Censored Word* and adores his big brother. I will say that due to my concerns about aggression toward other dogs of the same gender (since we cannot say the correct word) I had him neutered at 6 weeks of age before his testosterone came in. Some may be critical of that, but I did my research and felt confident that it was not harmful. Basically, I don't think he ever knew if he was male or female. He gets along with cats and small dogs. He is protective, aloof to strangers, but extremely affectionate toward family. I think we just have a good vibe in our home because I've always had multiple pets of different species and genders and have never had any problems except for one cat I took in as a stray who became excessively aggressive with the other cats. 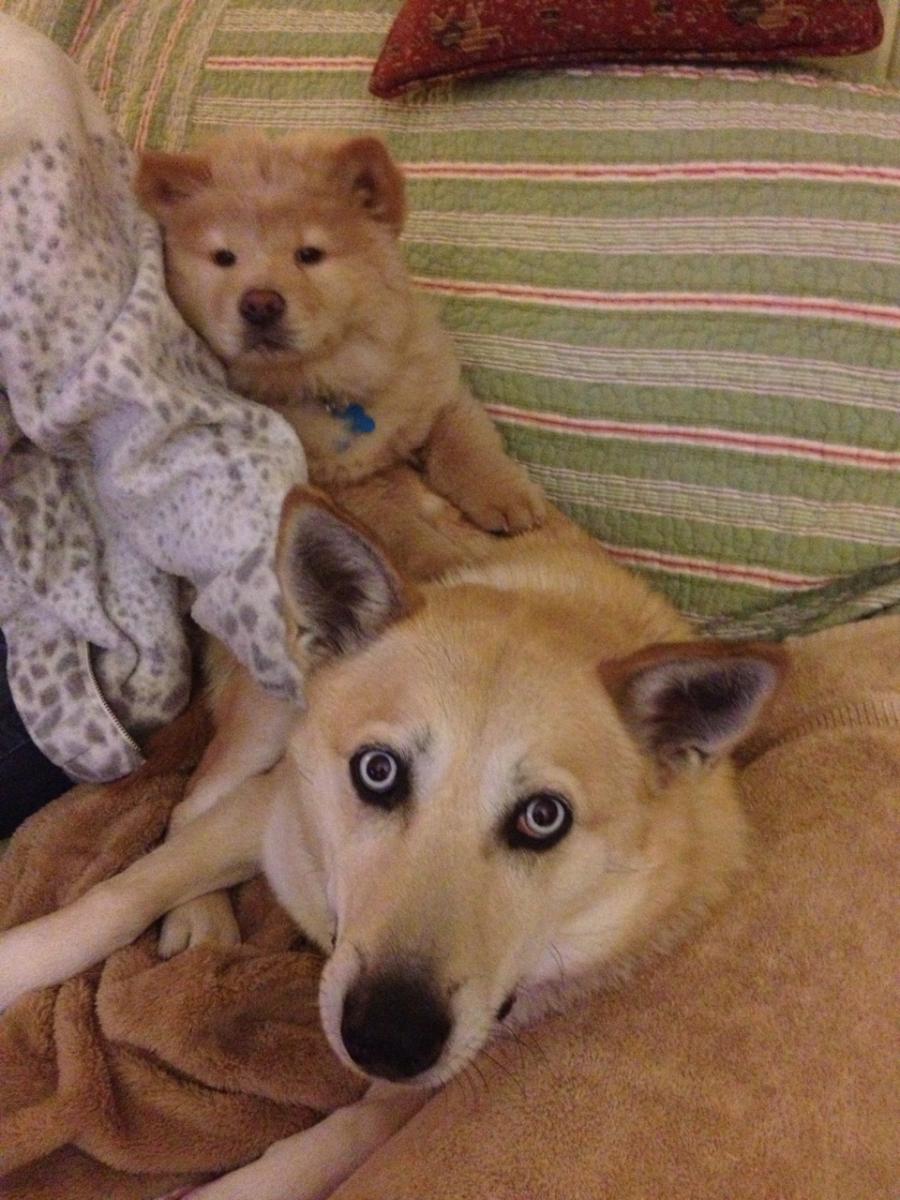 A dog's eyes will tell you a great deal regardless of breed. Some people claim they can't read a Chow's eyes but with practice, it's as easy as with any other breed.
Wellness dog foods in Australia
Brands of dog foods at Lucky Pet
Top

No problems with my chow Max. It's very friendly to another dogs. And dogs for him - too. My friends have dogs - chow chow and for example golden retriever etc.
Top
Post Reply
11 posts • Page 1 of 1